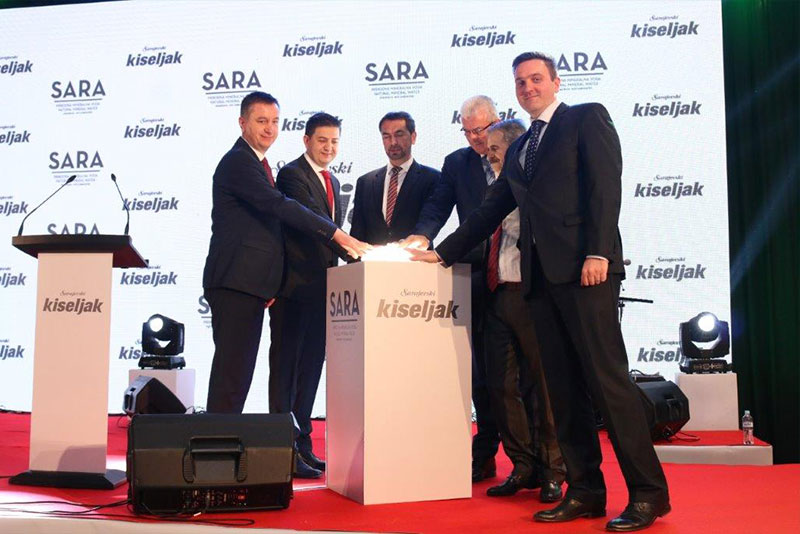 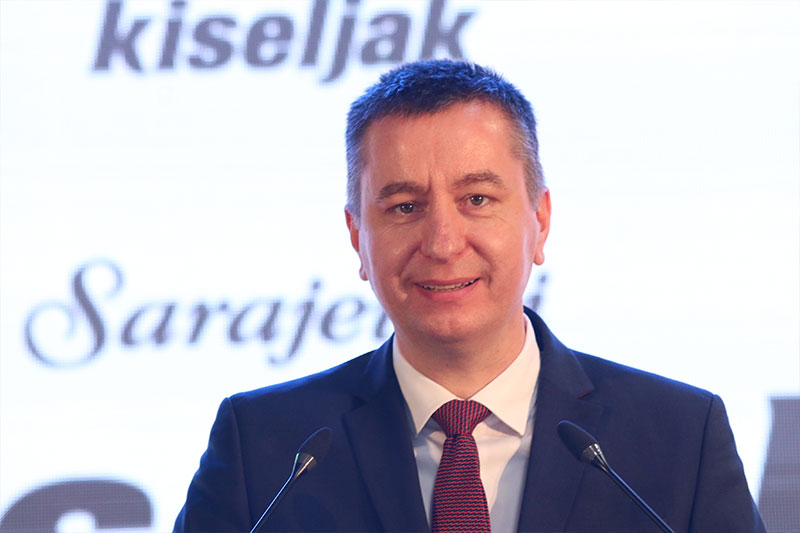 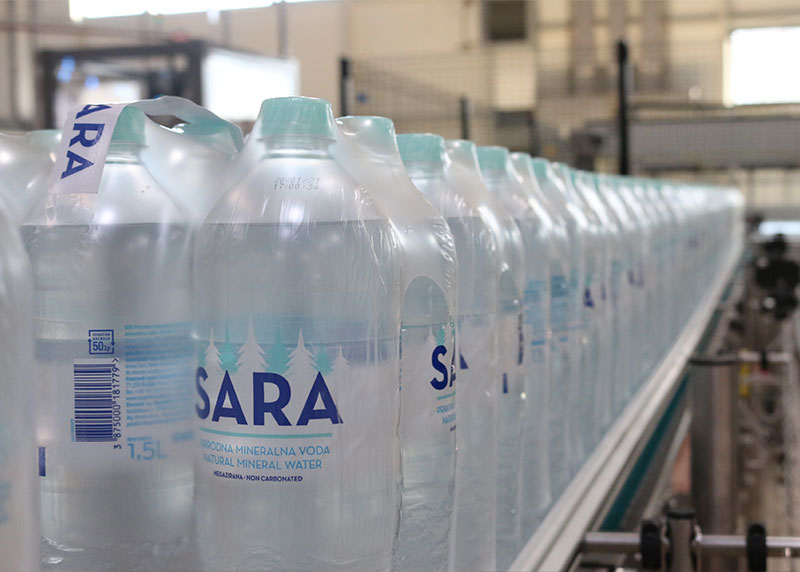 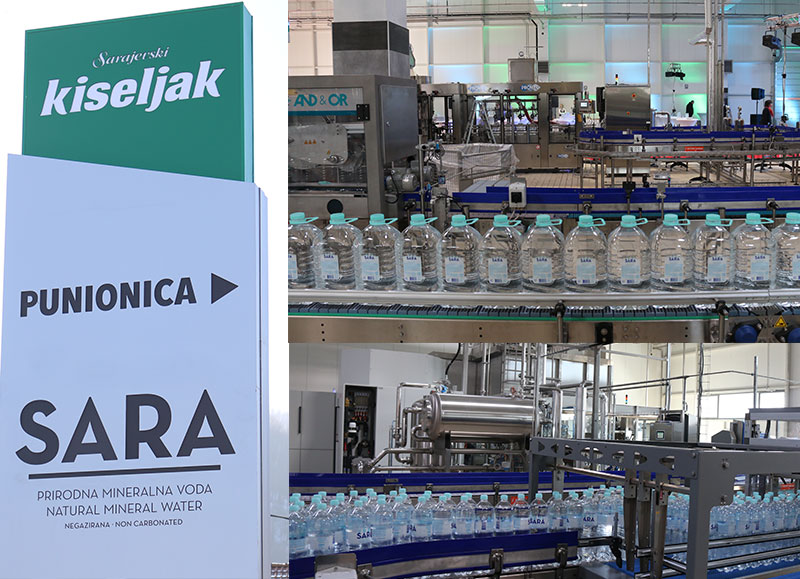 On 21st January 2020 Sarajevski kiseljak held an opening ceremony to put into operation the bottling line of its new factory in Kreševo. The new facility is the company’s largest strategic investment worth more than KM 20m in total.

The construction of the new factory spreading over an area of 30,000 square meters has provided for a significant increase in the production and storing area of Sarajevski kiseljak, leading producer of mineral waters and carbonated soft drinks in Bosnia and Herzegovina and the expansion of capacities as well as the factory’s modern technology will enable Sarajevski kiseljak to grow its annual production quantities and further strengthen the company’s market positions. The Kreševo factory employs 30 new workers.

At the opening ceremony attended by numerous invitees, Sarajevski kiseljak today put into operation the bottling line of its new factory in Kreševo, the company’s largest strategic investment worth more than KM 20m in total

„This strategic investment marks the beginning of a new era for Sarajevski kiseljak and is a large step forward in the company’s strategic positioning on the market. Last year we produced more than 120 million litres of water and refreshing soft drinks in the existing facilities. The brands of Sarajevski kiseljak and Jamnica dominate the bottled waters market of Bosnia and Herzegovina and are the first choice among consumers in this segment of the market. Technological improvement and the increased capacities in the new factory will make it possible for the results to be considerably higher. Thus we will additionally strengthen the leading position in Bosnia and Herzegovina and also have the lever to significantly expand into new markets. The new factory currently employs 30 new workers and that number will grow in the future as we will increasingly utilise the production capacities. I would like to thank everybody that contributed to the development and the start of operations of this plant / factory, and my big thanks especially goes to my predecessor and colleague Tomislav Slišković, to whom this factory is the highlight of his career and he can now peacefully retire“ – said Davor Čičić, Director of Sarajevski kiseljak on the occasion of the opening ceremony of the facility in Kreševo.

Renato Pejak, mayor of Kreševo municipality highlighted the exceptional importance of this event for Kreševo and its residents because opening jobs will help create better conditions for the existence of young people in Kreševo and help them stay, which is the primary goal and task of the municipality. “Kreševo has gotten a modern factory equipped by the highest standards, to the wellbeing of our entire community and that makes me, as Mayor, very satisfied. I am sure that in the future too we will together be oriented towards building, employment and economic prosperity, and finally a better and happier future in this area.” – said Pejak.

Tahir Lendo, Prime Minister of Central Bosnia Canton emphasized that an opening of a new factory is one more in a series of significant projects that are being realized in Central Bosnia Canton (CBC). “The Government of CBC is, according to its capabilities, always ready to support projects that represent a base for further economic development of the Canton. This is another confirmation that the Economy in our Canton is rising. I wish luck and success to all current and future employees of Sarajevski kiseljak.” – said Tahir Lendo, Prime Minister of CBC.

The facility in Kreševo is the first large production investment at Fortenova Group since several years and the holding company, together with Jamnica gave a significant support to its implementation. So, the opening ceremony was an opportunity for Fabris Peruško, Member of the Board of Directors and CEO of Fortenova Group to address the attendants as well.

„It is a great pleasure to attend the ceremony intended to mark this great greenfield investment in production. Personally, I am very happy to mark my second anniversary at the helm of this large company with this new investment. On a symbolic level, this factory represents a major turning point in our businesses, as this is Fortenova Group’s first production investment that, I believe, leaves the turbulent period we have been through completely behind us. We are particularly proud of the new jobs that have been opened, which is the most significant contribution of any employer to the community it operates in. Furthermore, with the new products to be produced in this facility the factory also stands for a developmental improvement, which is the key strategic guideline of Fortenova Group. I am certain that the new products that are soon to leave this facility will equally attract consumers and that Sarajevski kiseljak can look forward to a stable growth and development in the long term“, Fabris Peruško said on that occasion.

Production lines at the Kreševo factory represent the latest technological achievements in this field, including state-of-the-art production equipment and automated production process guidance. With a view to improving productivity and efficiency, all workers attended special training for the job. In line with the tradition and practice at Sarajevski kiseljak, the production processes in this factory will as well be run meeting high environmental standards and sustainable development principles.

The factory will soon launch Sara non-carbonated natural mineral water whose name was chosen in accordance with the best values of this water. In the forthcoming period, the factory in Kreševo will produce flavored water and juices. 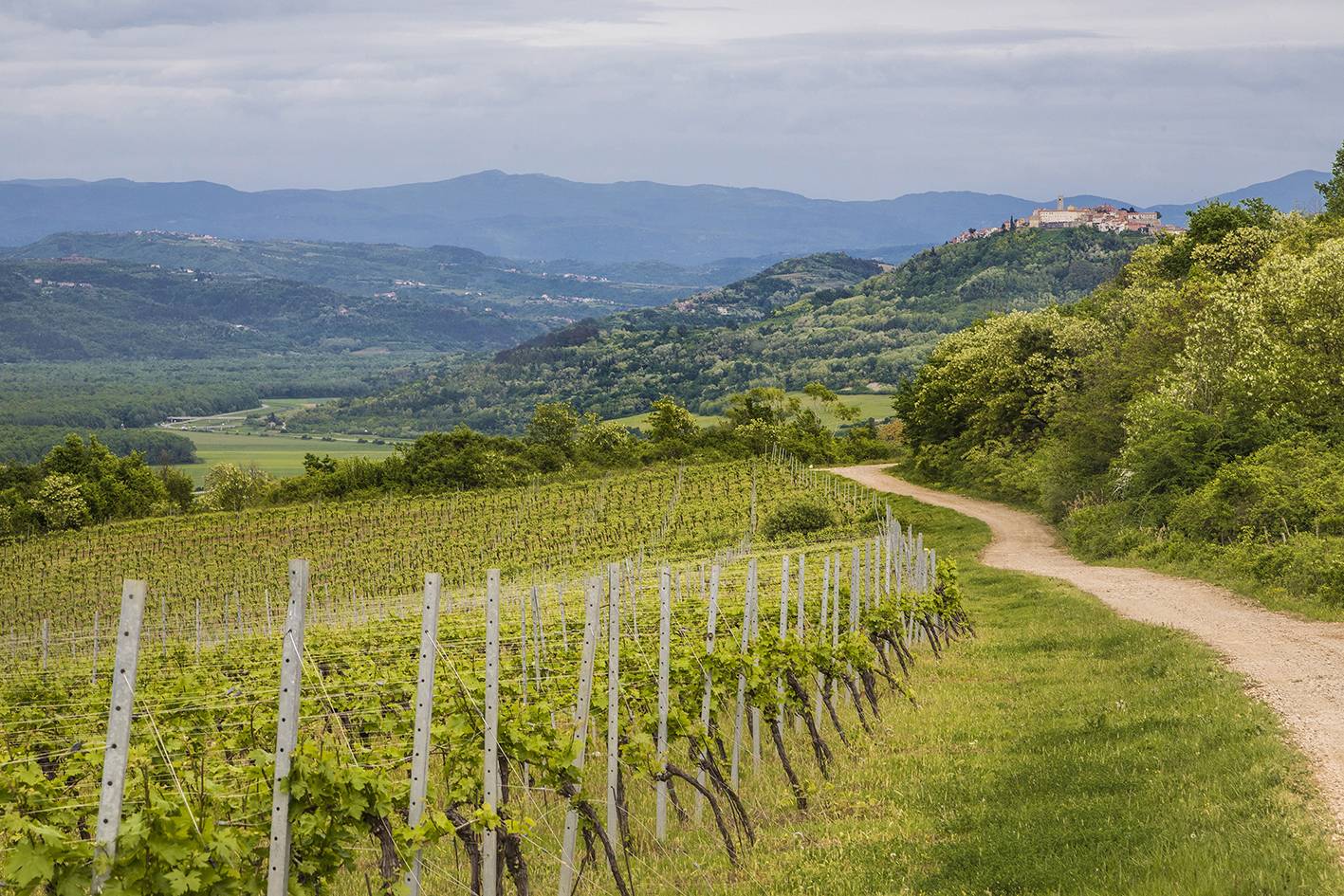 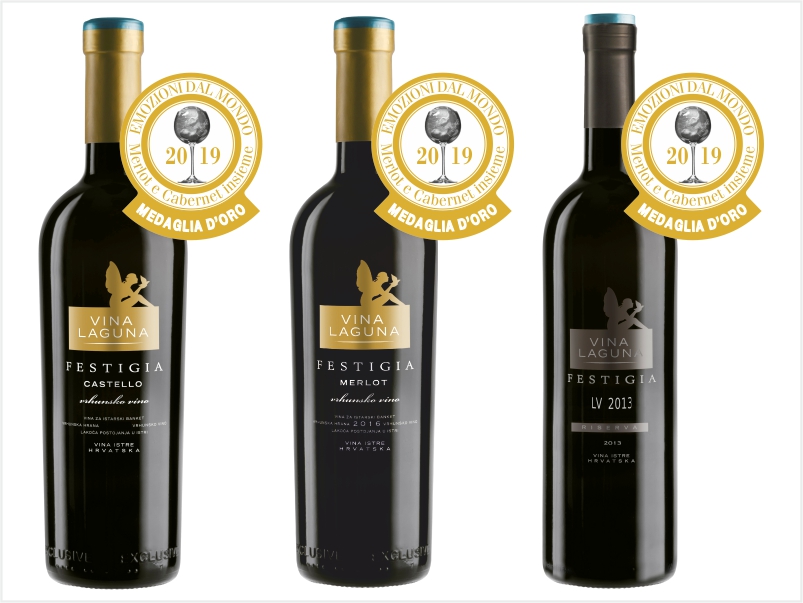 Wines produced by Agrolaguna – Castello Festigia, Riserva LV and Merlot Festigia won gold medals at one of Europe’s most prestigious oenological competitions. Merlot Festigia also won the award for the best Croatian wine in this competition as selected by the journalist jurors. „Emozioni dal Mondo: Merlot e Cabernet Insieme“ is the world’s only competition focusing on Merlot and Cabernet and their blends and it is held under the auspices of the prestigious international organisation OIV – International Organisation of Vine and Wine.

Castello Festigia, Riserva LV and Merlot Festigia awarded at the world’s most prestigious oenological competition for Merlot and Cabernet

„We are exceptionally proud of the awards won in this prestigious competition. The OIV patronage provides this competition with additional credibility, which is yet another acknowledgement of the premium quality of wines produced in Istria. The harvest in our vineyards has been completed for this year and we will give our best to keep producing wines that will achieve such prestigious results in competition with the best global players“ said Milan Budinski, Director of Viticulture and Production at Agrolaguna.

Over the three days of the competition held in the beautiful Lombardian town of Bergamo, numerous guests enjoyed more than 257 samples of premium wines from 27 countries from all over the world. 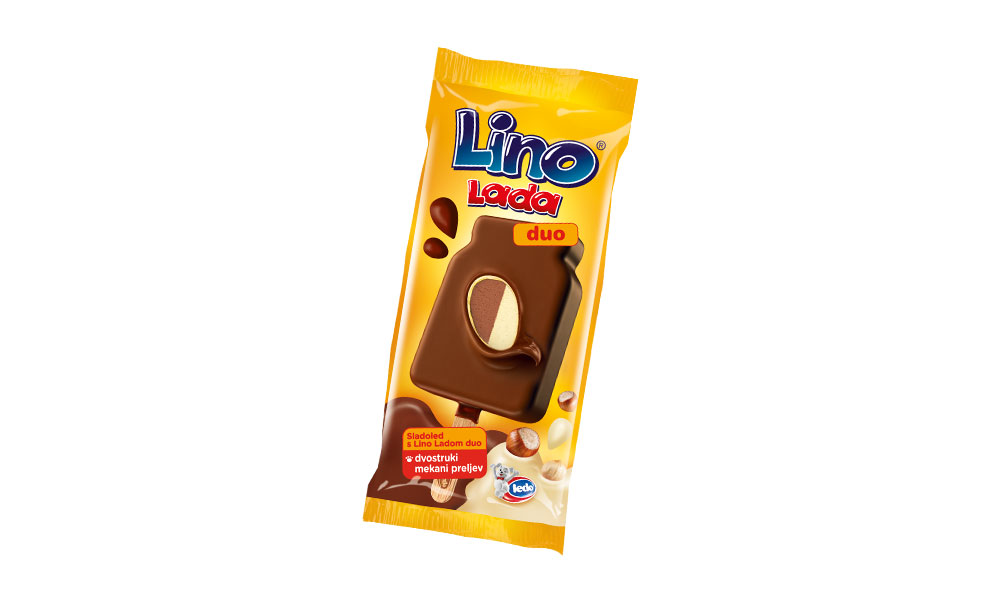 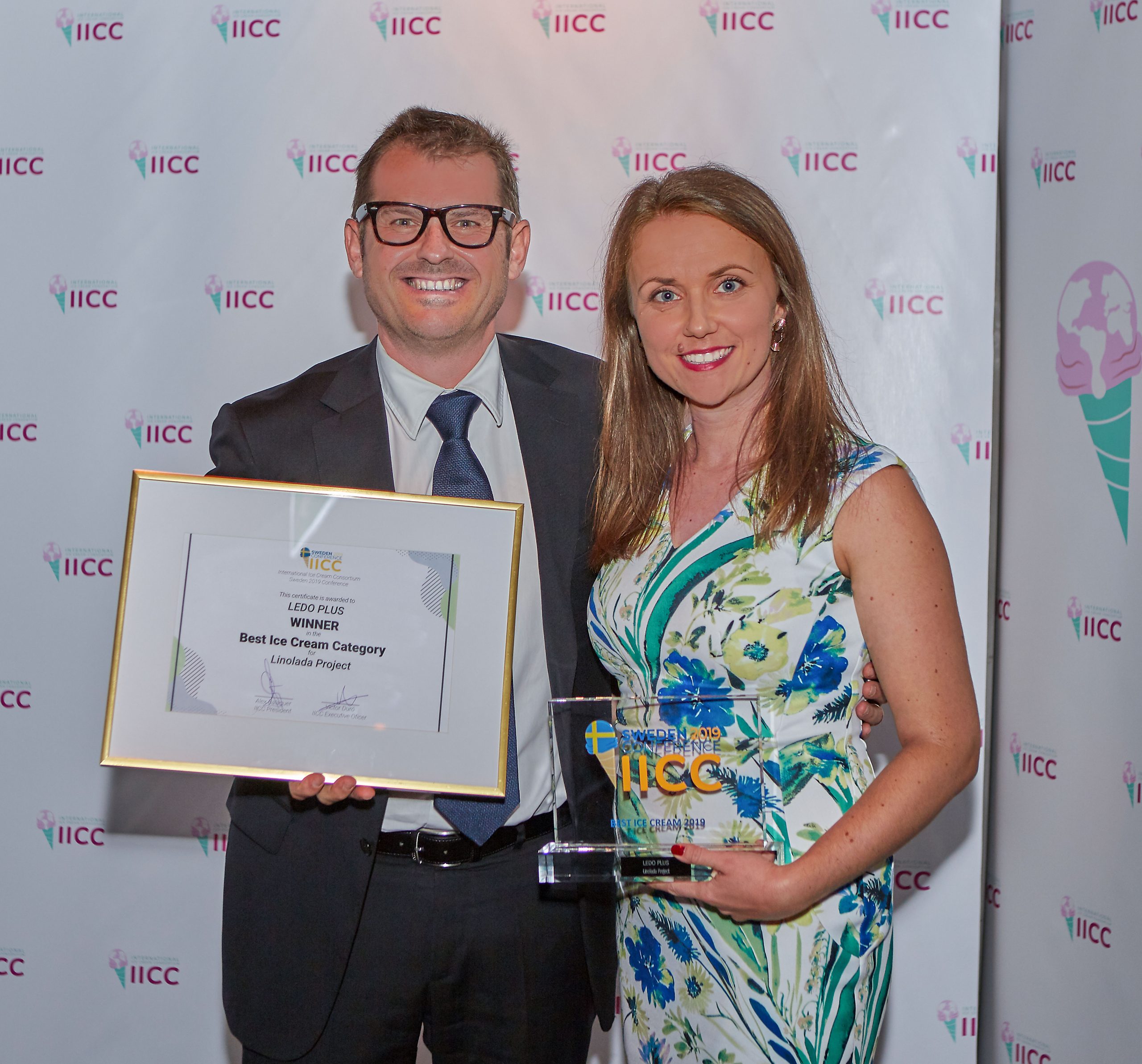 Ledo’s Lino Lada ice cream was declared the world’s best ice cream, with the gold medal awarded to Lino Lada ice cream by the International Ice Cream Consortium at the competition held in Sweden, where Ledo products once again stood out due to their creativity, idea and production technology.

The International Ice Cream Consortium (IICC) is an association of all independent global ice cream producers, the purpose of which it is to exchange experience and acquire new knowledge through various educations and workshops. Each year their summit is held in one of the member states, with the highlight of the event being the presentation of awards in various categories.

Experts were particularly delighted with the unique form the the Lino Lada ice cream and the innovative soft dressing, but the decisive factor that made this ice cream become best in the world is the experience of the Lino Lada spread that was successfully translated into the ice cream.

The ice cream was created in cooperation with Podravka and launched on the market in April this year. The first batches were sold in only a few days, which made this ice cream the most sought after dessert.

„We take exceptional pride in this award and acknowledgment, confirming Ledo ice cream as the world’s best ice cream in the opinion of the industry, or independent global ice cream producers. This award is an additional acknowledgment of the committed work of our employees, and in particular our R&D team which has been transforming its creative ideas into finest ice cream and frozen food products. From year to year Ledo has been testing and developing plenty of various ice cream flavors and combinations, always with a view to meeting the requirements of its consumers, as they always come first. Being the best in the world is a great honour, as well as an obligation to keep producing highest quality ice cream going forward and to lead the way in terms of technological solutions, innovations and creativity on a global scale,“ said Marin Poljak, CEO of Ledo.

It is worth reminding that this is not the first acknowledgement to Ledo brands, as many awards have been won in various areas of operations, such as innovations, technical solutions and marketing communication. Thus the Hashtag project won the IICC award for the best commercial solution and the CROPAK award for the best graphic design. The company’s focus on quality and innovation is also confirmed by awards won for the most innovative ice cream, presented in previous years to the products Chocolate Cake on a Stick, Hot Love and Ice Snack, while best ice cream awards were presented to the products King Truffles and Blueberry Cake on a Stick, all awarded by the IICC Association.

Cookie policy
In order for our page to function as intended and so that we can further improve our services, we use cookies: necessary and analytical. By clicking „Adjust settings“ you can limit their use. You can find more information in our "Cookie policy".

Enable or disable the use of necessary (functionality) cookies or analytical cookies that are described below:
Necessary cookies Always Enabled
Neophodni kolačići omogućavaju osnovne funkcionalnosti stranice. Bez ovih kolačića, web stranica ne može pravilno funkcionirati, a možete ih isključiti mijenjanjem postavki u svom web pregledniku.
Analytical cookies
Analytical cookies help us improve the website by collecting and analyzing the data on how the visitors use the website.
SAVE & ACCEPT